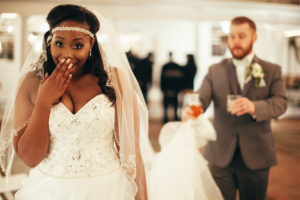 The Bells, established in March of 2015.

Mitch and I met through (dramatic pause for effect) FACEBOOK. I always have told people: you can meet a sociopath anywhere. So you might as well meet them online — right? To be fair, we attended the same high school, though he’s a couple of years older. Apparently, he always had the fever, and then, I’m guessing, my pretty chocolate ass popped-up under the feature “people you may know.” He sent me a friend request, I asked him who the hell he was, and the rest is history. That’s the story, and I’m sticking to it.

That was back in 2010. Eight years later, we have a home in Atlanta, 2 fur babies, and we’re 3 years into marriage. Sidenote: I’m not updating this math, so when it’s 2022, and we’re still out here winning — you’re on your own. 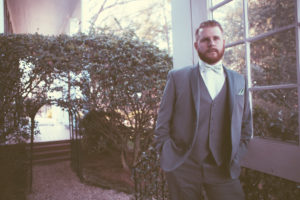 Mr. Bell is native to Georgia. Went to school in Lilburn, and attended college at Georgia State and College, where he studied History. Pretty sure he’s one of the few people that can actually be referred to as “laid back.” Let’s face it, most people only ascribe that to themselves, while it’s rarely ever the first three characteristic anyone else uses to describe them. It’s definitely his top three.

He loves history, art, and collecting rocks. Dead ass. You could get him a basic, dull-behind rock, from somewhere he’s never been, and at a house party he’d gush all over it while he shows it to guests. That and his gun collection. You will be shown the gun collection. Well, your husband or spouse, at least.

He is one of the kindest people you will ever meet. But in a subtle way. Some people have that aura, and he’s one of them. 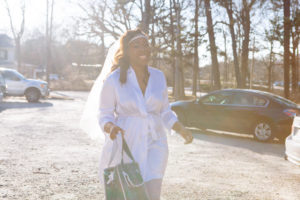 First of all, do not come for me because I used this thin ass picture of myself.  I could have been really trifling and shown a picture that’s 5 years old, instead of 3, cuz the kid was REAL fine. Just had to get that off my chest real fast. Anyway, GRADY BABY in the house. If you aren’t from Georgia, you won’t get that – no worries though.

Born in Georgia, raised in Cali. I mention the Cali part, even though I’ve been back in Georgia since 2001, because I’m still going through a culture shock.

I. Am. NOT. Laid-back. People would mostly likely describe me as loud, adventurous, and honest.

Attended Oglethorpe University (undergrad), The Hague University (Netherlands, study abroad), and Brenau University (MBA).  A bit of a late bloomer, I didn’t finish undergrad until I was 26. Currently, I work in FinTech, and while I may not be in FinTech anymore when you, yes YOU, read this, I will most likely still be in corporate America. Unless you a captain save a —, and can get me the hell up out of the sunken place (otherwise known to me as corporate America). Seriously, let me know if you cape’n.

I LOVE to travel. And I love peonies.

(whatever voice you read this in, trust me when I say… you’re in for a surprise)

I’m a little late with this reminder. Love you,

Our Whimsical Christmas Tree Who would have that

Headed into Turkey Day like… Earlier today I wa